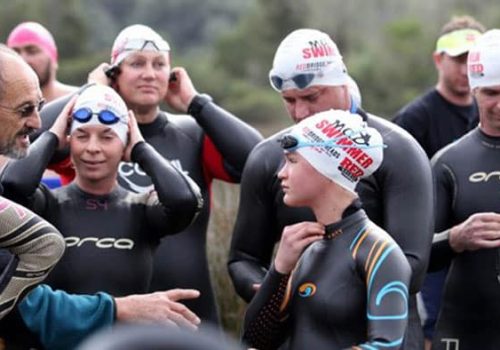 Sharks, cold water and the little matter of a pre-swim half marathon didn’t put off a group of Madswimmers from completing the 14.5km crossing of Knysna Lagoon on Saturday 11 July. Despite it being National Shark Week, 30 swimmers took part in the Knysna Lagoon swim. Shark pods, motor boats and kayakers accompanied the solo and relay swimmers, who were raising funds for the Sinethemba Youth Development Centre. Water temperature was between 14 and 16 degrees Celsius.

Seven swimmers also took it upon themselves to compete in the Knysna half marathon as a warm up for the swim. Of the six people who completed the solo swim, Jean Craven (founder of Madswimmer) was the only one to also complete the half marathon. “It was quite a hard race, a lot of the path more trail running through a jungle, but the spectacular scenery did ease the pain,” says Craven. “At about 8km to go I actually saw the Red Bridge where we were going to swim the afternoon. At that moment it crossed my mind that just maybe I was a little ambitious!”